When I heard that Andrew McCarthy would be stopping at the Free Library in Philadelphia as part of his book tour, I messaged my area Twitter travel friends to see if anyone would like to attend the lecture with me. I enjoy Andrew McCarthy’s writing whenever I see read it in National Geographic, and I had seen half of his presentation at the Philadelphia Travel Show in the Spring. But book lectures are probably my faaaaaaaavorite thing to do in this city (disclosure: I was an English major) not only because the Central Library is a gorgeous building and makes me feel collegiate and ambitious and literary but also because sometimes the authors drop gems of truth upon me that just make me feel like “YES.”

During Andrew McCarthy’s Q&A, that moment came when he provided an anecdote about knowing when he loved travel. “I have this friend who wanted to move away from Connecticut and when I asked her why she said ‘I have no roots here.’ It then occurred to me that I have never felt any kind of rootedness anywhere.”

I had been grappling with this idea for a few weeks before the lecture and just couldn’t put it into words. A recent development was causing me to question whether how much longer I should live in Philadelphia, and a recent acquaintance I had made with someone who completely loves the city put me in a state of unease. Why had I never felt that rooted? Is something wrong with me?

Andrew McCarthy is on tour promoting his most appropriately titled book The Longest Way Home: One Man’s Quest for the Courage to Settle Down and if he’s scheduled to appear near you, I’d highly recommend you fight off the legions of aging fangirls and hear what he has to say. Especially because what he says is “Don’t sell a destination. Tell a story.” Imagine that, bloggers. 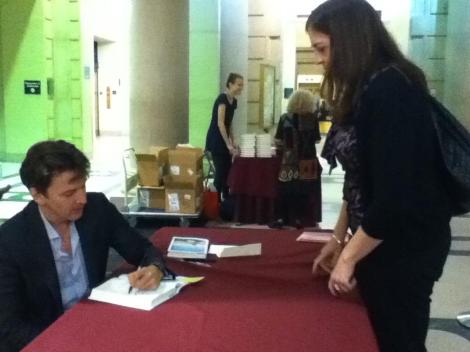 Andrew signing a book for my friend Suzanne, aka @philatravelgirl at his lecture at the Free Library on October 3.