I had the good fortune to be in Berlin, Germany last week on 9 November, 2014, the 25th anniversary of the “fall” of the Berlin Wall. I use the word “fall” loosely because the anniversary marks more the day of a blunder-filled press conference in which a state official accidentally permitted open travel across the border, “effective immediately,” than it does a day when the wall physically came down, 28 years after it was built and splitting Berlin into an East and a West.

It was a really special time to be in Berlin, knowing little-to-nothing about this momentous event that occurred within my lifetime (!). I think what struck me most was imagining what a life would be like spent 28 years inside of an impenetrable border, with absolutely no travel allowed. I couldn’t help but reflect upon all that I had seen and done with my life’s 28 years culminating up to that moment I stood in front of that Wall. Would I have been so desperate and brave to risk escaping a concrete cage?

Berlin celebrated the anniversary by tracing the path of the former wall across the city with glowing balloons the weekend leading up to 9 November. How casually we crossed from one side of the balloon wall to the other! After sundown on Sunday, to much fanfare, the balloons were released into the sky.

The balloons as set up around East Side Gallery, along with the movie playing the press conference that opened the Berlin Wall.

Where the Wall once stood, now a Wall of autumn trees

Strolling along the invisible Wall at Mauerpark

Berliners watch a documentary about the Wall at Mauerpark 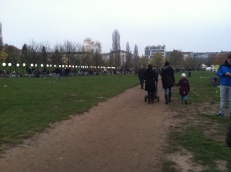 In Mauerpark, we crossed from East Side to West Side effortlessly.

On the night of 9 November, the balloons were lit.

People, on either side.

At the Memorial for the victims of the Berlin Wall, cross sections in the Wall revealed the balloons on the other side. 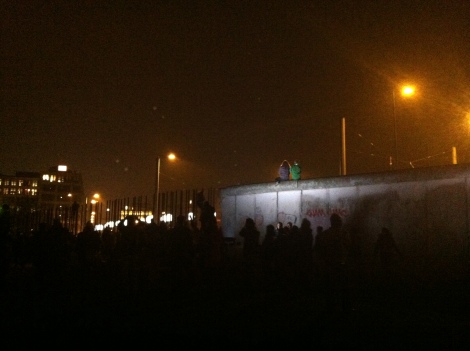 Waiting for the balloons to be released 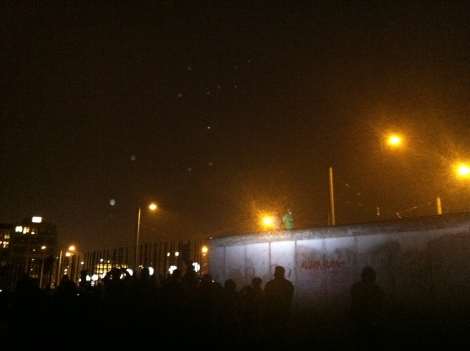 One by one, the balloons were released into the sky, celebrating 25 years of unity.